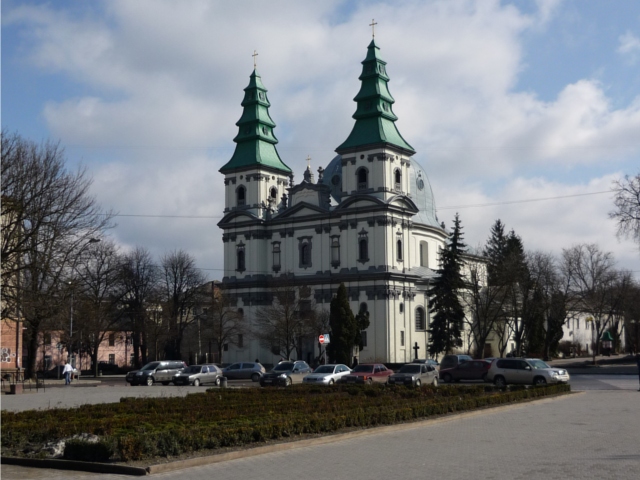 Ternopil is the city with beautify Eastern Europe downtown and the lake. Also it has spread vast farm in the suburbs.
Since people are generally positive for Japanese, and the Ternopil Oblast is comparatively close to the Poland and Slovakia, Ternopil can be said to be an advantageous location as the advance base for Japanese companies.

First of all we visited Victoria, Inc., a typical agricultural company of Ternopil. We received a description about the crops and livestock products from the president of the company Stepan.

Victoria’s farm is 2,404 hectares. It is a smaller company than Svarog that we visited yesterday. But it still will be large agricultural company that has a farm as large as Tempaku-ku, of Nagoya city.
In Ternopil Oblast there are agricultural companies such as Victoria, Inc., and they are making a union.
The main crops are rapeseed, barley (winter, spring), wheat, sunflower, soybean, kidney beans (red beans) and sugar beet etc.

We visited the Victoria’s pig farm. They own approximately 12,000 pigs.
3500 pigs live in one building.
Pigs become about 120 kg in about six months, and are shipped.

There is a bazaar in Ternopil. A number of small stores is lining up. There is also a new supermarket, but people seem to like to be shopping in the bazaar.

We saw Prius police cars in the Ternopil city. It is one that Prime Minister Abe has expressed his presentation at the time of Ukraine visit. The car stands out in the downtown.
Maybe thanks to this, people are interested in Japanese cars or hybrid cars.

There are 3-4 sushi restaurants in Ternopil. We went to the restaurant that are thriving in it.

This is the appearance of the restaurant. It doesn’t look like sushi eating place for us. But inside there were full of people. Because they were prosperous, they extended the building again and again, then became the current figure.

The staffs wore the national costume of Ukraine, and were willingly comply with a photograph request.

There is Zbarazh castle 10km to the north-east from Ternopil city.
Inside the castle, there are museums and you can experience the fencing and archery. The place would be good for weekend sightseeing.
]]>